keep updated in the world of Debris

An interesting thing happened this week. My youngest daughter’s teacher called and asked us to attend the monthly assembly at the school because Lainey was getting the “character trait” award. I’ve mentioned this before, I’m sure, but to refresh your memory – in order to teach good values (that kids may not be getting at home) the school board has character trait posters and reminders plastered all over the school to teach kids about integrity, honesty, courage, etc. They then reward a chosen kid or kids from each class that have displayed the current character trait throughout the month. The chosen kid gets a ribbon (the ones you used to get in track and field) and certificate, and get to parade across the stage to accept the honour with a round of applause. I don’t know if it changes a rotten kid into a great one, but my kids have come home each year with a ribbon sooner or later, and they’ 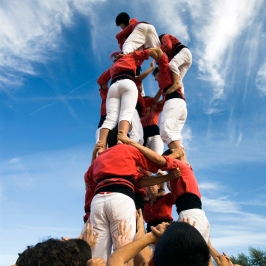 ve been pretty impressed about it. If for no other reason than they get to walk around all day wearing a ribbon to signify that they are more “Inclusive”, “Empathetic”, “Optimistic” or “Caring” than everybody without the ribbon. Are we teaching kids that they need to be rewarded and applauded for showing normal and socially acceptable behavior, and teaching them to gloat about achieving it? As sad as that sounds, I would say that is what we are doing – keeping that bar low. You aren’t expected to do those things, but if you manage it – you get rewarded! I don’t know if we’re doing them any favours, but since this month it was my kid getting the award – hey, it’s a pretty good system.

Anyway, when my husband and I showed up at the assembly, I couldn’t find my son in the crowd. Turns out, he was also waiting backstage for a ribbon. Well, we plumped our pride and got our camera ready. Two great kids? Wow. Imagine our pride (and frankly, surprise) when both of our kids walked across the stage with ribbons for this month’s character trait: Cooperation.

For those of you not familiar with my children, let me clear up the confusion. My kids don’t cooperate. Ever. They fight about who has to go first at music lessons, who last filled the dog’s water bowl, who brushes their teeth first, who is faster, smarter, sweeter, or the family favourite. They battle over whether music should be on or off for the car ride, whose dish was left on the kitchen table, and who got to pick the last movie on family night. At any given time, either one of them will be hollering “UNFAIR” for any number of stupid reasons – that one of them got to pick first, go last, ride in front or have the bigger piece. There is little to no cooperation going on in this house – which is why I had to contain myself from jumping up and yelling “Fixed, fixed!” from the crowd of proud parents.

Those sneaky little jerks. You me

an they actually know how to cooperate? Not only do they know how, but they stand apart from the rest of the class and excel with this particular character trait? Unbelievable. Never have I been so perturbed at my kids for coming home with an achievement ribbon. I wanted to ground them both for the rest of the week and confiscate those damn certificates. My husband and I went home wearing the “in yo’ face” and “gotcha, sucka” ribbons, wondering how we managed to do something so right and so wrong at the same time. I guess different rules apply when they’re out of the house.

Cooperation? Well, I’ll pull those ribbons out during the next round of “he’s looking at me/she’s so annoying/he won’t turn that down/she won’t stop bugging me”. At least we looked like stellar parents to the teachers and other adults at the assembly. We smiled, nodded our heads knowingly, and took all the credit we could – isn’t that what being a parent is all about?